Florida’s primary elections are just days away, on Tuesday, August 18. For those of you still on the fence, lean this way and listen. U.S. Sugar and Florida Crystals are putting their stamp on the 2020 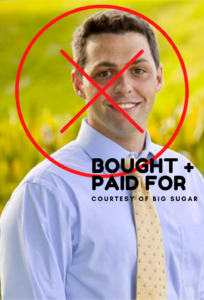 “This should alarm anyone in this district, which is ground zero for the massive toxic discharges from Lake Okeechobee to the St. Lucie estuary,” said Dave Preston, a volunteer representative from VoteWater.org. “U.S. Sugar and Florida Crystals are the primary sponsors of the PAC – public records clearly show that the two companies have transferred $500,000 into it in just the past three months alone.”

If you continue to follow the money, a simple inquiry into Kozell’s PAC , Rick Kozell for Florida, clearly shows the $48,750 deposit from Florida Prosperity Fund.

We can only guess what U.S. Sugar and Florida Crystals expect in return for their generosity.

A far better choice for District 82 is candidate John Snyder, who has been endorsed by both Votewater.org and Congressman Brian Mast, R, District 18, also home to the St. Lucie estuary. Mast, who endorsed Snyder months ago, has said this about the race: 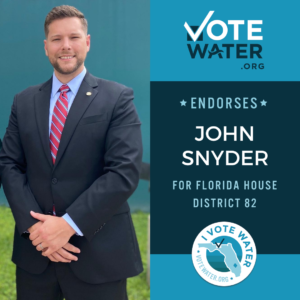 “I know that John Snyder will fight for our community, all of our people, and our beautiful waterways the same way he served our great nation. It also means putting the people in our community ahead of the sugar industry’s special-interest priorities that have hurt our health, our environment and our economy.”

According to John Snyder, “Rick Kozell spent his entire 2016 congressional campaign lambasting one of his opponents for taking sugar money. Now four years later he has shown no hesitation in opening up his wallet to a group that is heavily funded by those some interest groups. We have enough hypocrites in politics, we don’t need one representing the citizens of District 82.”

Don’t let Big Sugar buy this race right out from under us. Vote for John Snyder, R, District 82, a sugar-free candidate.