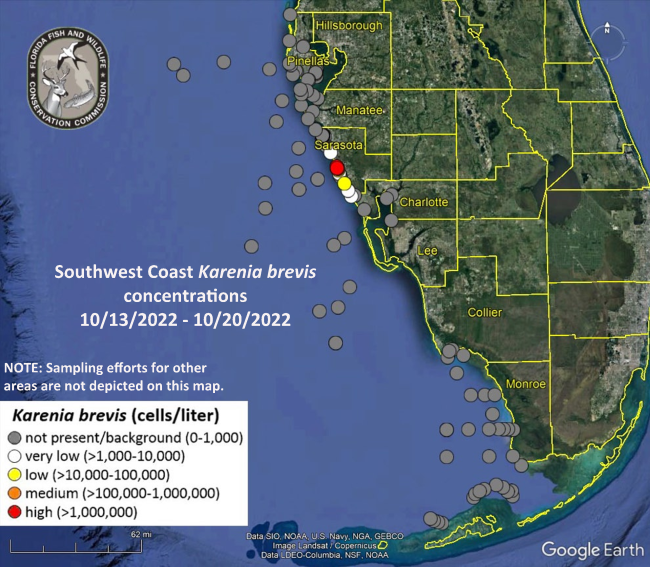 At the sole gubernatorial debate between incumbent Republican and Democratic challenger Charlie Crist, clean water wasn’t on the agenda. No questions were asked about the environment; DeSantis briefly mentioned his contribution to Everglades restoration in his closing remarks.

And that was it. It was as if clean water isn’t an issue this year.

Fish started popping up dead in Biscayne Bay five days prior to the debate. It was, scientists said, the worst fish kill since the notorious die-off of 2020, and seemed to be more widespread, with the hardest-hit areas near the C-8 canal at Miami Shores, and the C-7, off Little River near North Bay Village.

This die-off may have been triggered by the South Florida Water Management District’s decision to lower canal levels in advance of Hurricane Ian in an effort to prevent flooding. The canals are full of often-filthy water laden with urban runoff, trash and overloaded with nutrients from leaky septic systems and outdated sewer infrastructure.

But in fact those conditions have long been present along the bay, and the bay has long been staring down an ecological crisis. Just two months before the 2020 fish kill, the Biscayne Bay Task Force released a comprehensive report on how to help the bay recover. The subsequent die-off dramatized just how severe the crisis was.

Progress has been made since then, with Miami-Dade County officials saying work has begun on 50 of the 68 recommendations in the updated report. This new fish kill, however, is an indicator of how far the bay — and all who cherish or rely on it — have to go.

And then there was an ominous report out of Sarasota: The Florida Fish and Wildlife Commission’s weekly online report from Oct. 21 documented a high level of Karenia brevis — red tide — at several county beaches. Officials posted warning signs and residents said they could smell the telltale stench, though they hadn’t yet seen any dead fish.

This, after huge plumes of black water poured into the Gulf of Mexico from numerous inlets in the wake of Hurricane Ian. Previously, in 2017, Hurricane Irma helped trigger the red tide that slammed the Gulf coast over the course of two years.

Could we be in for a repeat?

The Biscayne Bay fish kill, Sarasota red tide — and the proliferation of Vibrio vulnificus along the west coast, which we cited last week — demonstrate that clean water remains a key issue whether candidates acknowledge it or not. Both these situations may have been exacerbated by Hurricane Ian, but our waters have “pre-existing conditions” that make them more vulnerable, more susceptible.

Our voter guides are designed to help you choose candidates who’ll do the most to address our ongoing problems. In the gubernatorial race, VoteWater endorsed Crist because we believe his proposals will do more to move the needle — though we’ve also recognized DeSantis’s accomplishments on Everglades restoration, and his willingness to stand up to Big Sugar.

We would have liked to hear both talk about clean water and how we might get there.

But the issue is being relegated to the back burner this year, ignored as other hot-button issues dominate the spotlight.

Unfortunately, ignoring our water problem is the surest way to ensure they come roaring back with a vengeance.