In 2020, VoteWater.org volunteers began an ambitious project of forming dossiers on Florida's elected officials and candidates. The goal? To uncover the dark money big polluters use to influence politicians and thrust those actions into the sunlight.

Whether you live in a region that has suffered from noxious blue-green algae, deadly red tide, nauseating sewage spills, radioactive phosphate mining, dubious agricultural pollution, or unbridled development, we hope you'll agree that the money being spent to buy a candidate's allegiance to these polluting interests is every bit as disgusting.

By identifying how "Dirty Money" moves from known polluters, through the bowels of Political Action Committees, and into the coffers of candidates' campaign funds, we hope to provide the public with a better understanding of how our state's water quality initiatives are being continually corrupted. 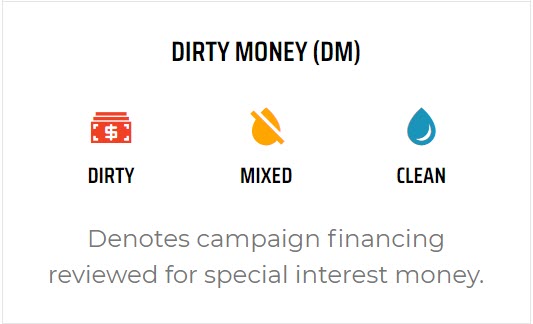 Florida's Division of Elections website has been a useful tool to track special interest contributions. On the federal level, donations have proven more difficult to investigate. As a result, we adjusted our initial goals to do a Dirty Money search on every state candidate in our 14-county list. What we have found so far has begun to be surfaced within our 2020 Voter Guides, and is illustrated by icons under a "DM" column alongside the candidate ratings and endorsements we have announced.

Why We Fixate on Big Sugar

It is well documented that for decades "Big Sugar" companies have bought outsized influence in Tallahassee and Washington. In addition to contributing to the legacy pollution in Lake Okeechobee and being geographically in the way of true Everglades restoration, their lobbying efforts have continually changed the course, costs and effectiveness of the state's water quality efforts.

For example, Big Sugar executives threw frequent hunting parties for State Congressmen and the Governor and even had a direct line to President Clinton's infamous desk. More recently, a sugar lobbyist was caught rewriting Water Management District policy and the board of governors had to be completely reshaped in an effort to undo special interest influences. Big Sugar's geographic location and political sway has subversively dictated the design of the Comprehensive Everglades Restoration Plan, changing more natural flow ways into complicated and incredibly expensive alternatives. Reneging on promises to sell their land to the state has redirected major storage projects from their land in the Everglades Agricultural Area (EAA) to other regions and communities north, east, and west of Lake Okeechobee. This sweet deal for Big Sugar has forced taxpayers to pony up billions more in taxes to even remotely begin to solve Florida's water quality crisis.

To further line the pockets of the Sugar Barons, a federal price support in the U.S. Farm Bill-which Big Sugar lobbies hard to keep-is the only force making their unsustainable and harmful farming practices profitable. Every time Big Sugar points their finger at someone else, or adds their thumb to the scale, the public pays the price, while sugar profits.

Big Sugar is certainly not the only polluting lobby in Florida, but they are a good (dirty) place to start our search. Campaign contributions may not make for as salacious of headlines, but the intent of their dark money efforts is every bit as despicable.

Meanwhile, the plumbing of South Florida is re-routed all over the state to keep the 700,000 acres in the EAA artificially dry in the wet season and wet in the dry season.

Digging in the Muck

The key players we identified are PACs taking contributions from polluters and spreading it around the state; Florida Prosperity Fund, Associated Industries of Florida, Floridians for a Stronger Democracy, Voice of Florida Business, Floridians United for Our Children's Future, and Florida Chamber of Commerce. 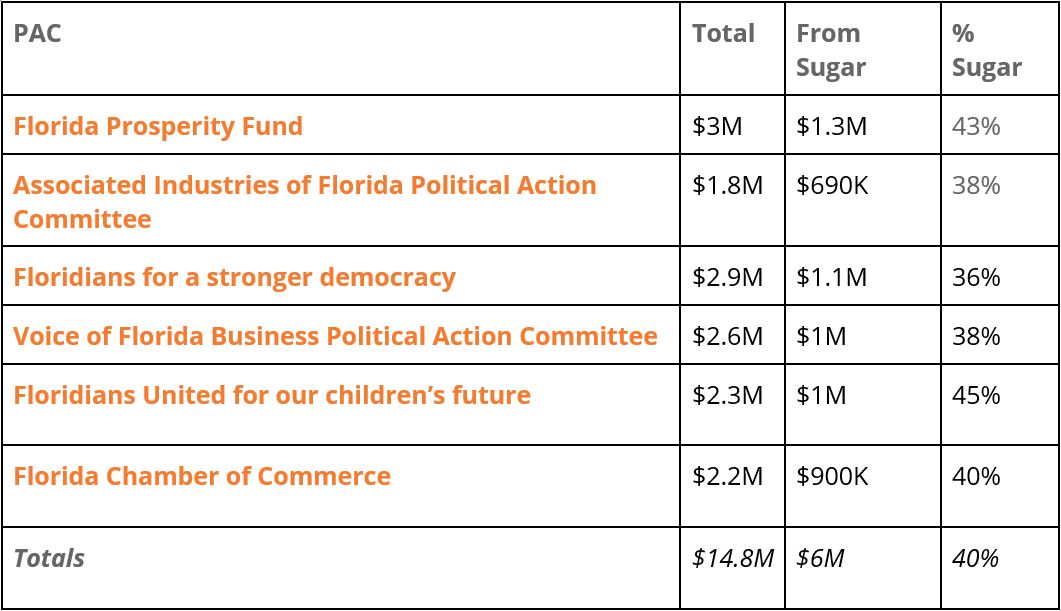 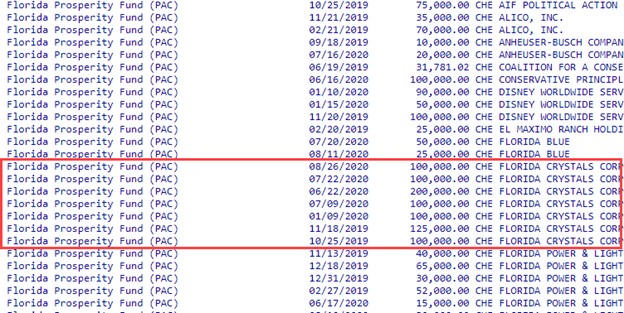 Based on $37.4 million dollars spent on state candidates through the end of September, these six nefarious special interests account for 40% of that spend. 40% of their funding, (approx. $6 million) came directly from Big Sugar. Time after time, the money was predominantly given directly to statewide political party coffers. From there, the parties can essentially anoint the winners by rewarding them with massive influxes of cash, typically dwarfing their primary opponents, by orders of magnitude.

This illustrates nearly a quarter of the money spent on the Florida Legislature elections came directly from Big Sugar. Tracking the exact amounts per candidate is tricky due to all the dilution-it's basically a giant "corporate-to-capitol" money laundering scheme.

Remember - we only analyzed state races in 14 of Florida's 67 counties! In those races, we found at least 25 candidates who each accepted thousands of dollars in contributions from groups who have been working to the detriment of Florida's water quality. In total, those 25 state candidates benefitted from nearly $7 million in overall campaign contributions for the 2020 cycle by late September. With that kind of war chest, they make for a nearly unbeatable force in most Florida districts. This doesn't even account for large sums of additional dark money and outside PACs throwing their support behind these types of candidates.

Despite the complexity of tracking special interest campaign financing, there are transactions and perpetrators that jump off the page. South Florida's Ana Maria Rodriguez, in FL Senate race 39, stands out as welcoming hefty sums from corporations and action committees with direct dirty money ties. Rodriguez's total contributions amount to over $728,000 through September 2020, and her campaign reports and voting record show zero attempt to hide her allegiances to big polluters. Jim Mooney in Florida House 120 has not taken as much verified dirty money as his cohort in the Senate, but ties to AIF, Floridians for a Stronger Democracy PAC and other lobbyist groups put him in dubious company. J. David Borrero was also found to have considerable amounts of dirty money.

Across the state in St. Lucie and Palm Beach, Gayle Harrell and Rick Roth are the representatives benefitting the most from dirty money. The same goes for Travis Hutson, Paul Renner and Thomas Leek of Volusia county.

In the water quality embattled Indian River and Brevard Counties, Senator Debbie Mayfield and Representative Randy Fine appear to be the stand-out dirty money denizens. Both played a role in 2020's contentious SB712 "Clean Waterways Act" which focused largely on municipal septic and sewer infrastructure while failing to place any meaningful regulations on big agriculture. Thus it should be no surprise the pair reaped nearly $750,000 in contributions for their efforts.

This is far from a comprehensive report. It's the tip of the dirty money iceberg we've begun to unravel.

Keep in mind these are the people being elected to codify policy on Everglades restoration and hammer out water quality legislation! Special interests' ability to propel their campaigns and political careers should be of grave concern to every Floridian.

These dark money contributions can be as difficult to track as the nonpoint source pollution they are intended to protect.

With this type of influence, the biggest polluters are constantly misdirecting the state's actions, which has proven an incredibly effective strategy for decades. Many a Florida politician has built their career on big shiny "restoration" projects that seem forever just out of our reach. CERP was supposed to take 30 years. Now we are 20 years in with only a single project out of 68 complete.

Policies on harmful algal blooms, fertilizers and sustainable growth haven't progressed much in those three decades either. There are over 1,700 verified water quality impairments in the state of Florida. None of the state's basin management action plans have ever successfully restored a nutrient impairment.

The bottom line is that if we want clean water in Florida, we must start voting smarter. We must no longer elect leaders who are beholden to special interests. It is VoteWater's goal to assist Floridians with this research. The VoteWater.org team looks forward to expanding our coverage throughout Florida in future election cycles and we hope you can help us in this critically important endeavor.

Together, we must create the political will to stop tolerating dirty money and elect leaders who are authentic in their commitment to improve Florida's water quality.