Will You Take Sugar Money? Voters are Asking.

Will You Take Sugar Money? Voters are Asking.

Florida politics changed this week, quietly but profoundly. Candidates for governor have declared–on the record–whether they will accept donations from the sugarcane industry.

That makes sugar money a statewide election issue in 2018, pushing two billionaire families and their sprawling businesses into the public spotlight along with their roles in the collapse of the Everglades and Florida Bay… and the destruction of the Caloosahatchee and its massive Gulf coast estuary… and the St. Lucie and Treasure Coast beaches. And the cancer, neurological disease, and liver failure epidemics linked to toxic algae… And the developing threat to Miami-Dade’s water supply… And the theft of huge swaths of public land… and taxpayer money.

In 2018 voters will know which candidates owe their careers and loyalties to Florida Crystals and US Sugar. And there’s a chance Florida’s next governor won’t owe them anything: Only longtime ally Adam Putnam is comfortable acknowledging his campaign’s mounting debt to sugar.

Fellow Republican Ron DeSantis hasn’t pledged to turn away sugar donors, but he’s been on the industry’s hitlist since voting for subsidy reform in 2013–also siding with scientists against the industry by agreeing the EAA reservoir needs more land didn’t win him any sugar cash. Democrat Andrew Gillum says he hasn’t gotten any either. Meanwhile Democrats Gwen Graham, Chris King, and Philip Levine refuse to accept sugar money. 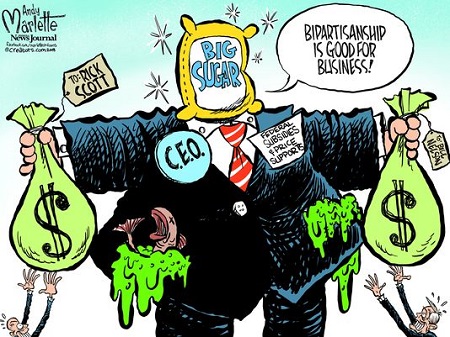 Bullsugar was founded for this moment, when voters pressure candidates to openly confront sugarcane’s influence. When Floridians whose livelihoods, lifestyles, and lives depend on clean water can clearly see who the industry funds.

We’re not naive enough to think that means we’ll win. Government handouts and Soviet-style price controls net these families billions–plenty to fund high-powered campaigns and cover up the financing; set up phony activist groups and protests; buy anonymous attack ads… whatever it takes to get elected. Although the landscape is shifting there, too: DeSantis publicly called out US Sugar for secretly funneling nearly $1 million into a smear campaign, which was pulled off the air this week.

Change happens slowly, and we don’t always recognize turning points when they happen. But this is one: The year sugar money became a litmus test in statewide elections.

And to virtually every voter, sugarcane candidates should be toxic. Like the killing of Everglades National Park. And three legendary American fisheries. And the jobs that rely on them. And the home values and local economies and cancer victims that die with them.

Sugarcane candidates should be tied to the industry’s corruption. Like embedding lobbyists to rewrite government reports and pollution standards. And using public resources to intimidate taxpayers. And slave trafficking.

Whatever happens in November, 2018 will be the year that politicians were forced to tell us where they stand on all of this, in one clear statement: I refuse sugar money.