Tony Friedrich never wanted to be an expert on how nutrient pollution strangles an estuary. But he never had a choice, either. He’s been studying the Chesapeake as long as he can remember, watching dead zones spread through one of the planet’s most productive marine nurseries. His message to Florida: The same cycle of decline is taking hold in Florida Bay, the Caloosahatchee, and the St. Lucie–and we don’t have much time to stop it.

His description of the ecology of a dead zone will sound awfully familiar to people who live and work on Florida’s estuaries. The real destruction is almost invisible. It starts from the bottom, where oxygen depletion and salinity imbalance wipe out benthic populations–the things that can’t swim away. Unlike fish, they don’t come back when the coast is clear, either. Once the foundation of aquatic life collapses, the chances of rebuilding are slim. Dead zones tend to stay that way.

If you spend time on the water, you’ll recognize the symptoms Friedrich describes, or you’ll get a sharper sense of what to look for. Don’t just look, though. Get involved–and not just here. Our waters are connected and almost no one is focused on the big picture of coastal conservation anymore. Advocates that used to fight for protections are increasingly dedicated to undoing regulation and helping manufacturers sell products. It’s up to us.

Florida is lucky. We can still stop dead zones from killing our estuaries and the lifestyles and livelihoods they support. Time’s running out fast, though.

We hear the term “dead zone”used to describe water conditions around the country but do we really understand what this means? On a basic level, a dead zone describes an area so deprived of dissolved oxygen that life cannot exist. Dead zones are associated with human activity.

Dead zones are usually caused by an abundance of nutrients (phosphorus and nitrogen) that come from fertilizer and septic/sewage. When the excess nutrients enter the system, algae growth is triggered. The dead zone cycle is activated when the algae sinks and decomposes. This process uses oxygen and can deplete large areas. Fish can leave the area in some cases, but what happens to all the life that can’t?

Long term monitoring of the Chesapeake Bay can offer some insight, but first, you have to understand a few things about it A large portion of its freshwater enters from the Susquehanna and Potomac Rivers and the Coriolis Force–caused by the Earth’s rotation–deflects to the right or western side. That means saltier water entering the bay tends to congregate on the eastern side, opposite high population areas like Washington DC and Baltimore. Why is this important? It directly relates to the areas plagued by dead zones.

The dead zone in the Chesapeake Bay extends along the western side from the mouth of the Potomac to just north of Annapolis, including a large area inside the Potomac. Areas deeper than 22 feet are at most risk. The tidal flow is weak and algae tends to settle in this zone. 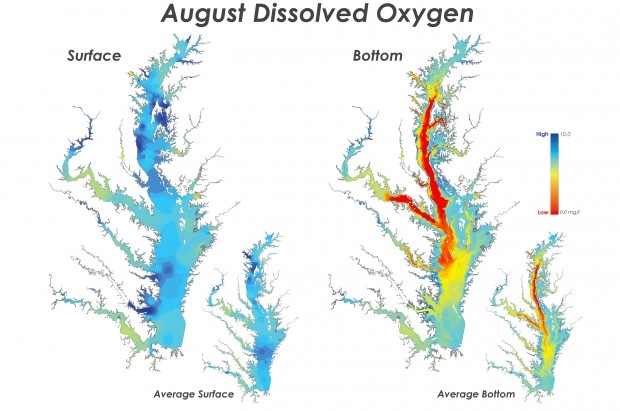 The name is enough to raise concern: DEAD ZONE. But what is actually happening under the water? The state of Maryland has been doing benthic sampling for many years. That means they take core samples of the bottom and see how many little critters are living in the mud. These creatures are called “benthic fauna” and include a key species, the polychaete worm. These are commonly called May worms because that’s when they spawn, leaving the mud and darting up to the surface in massive swarms. This spawn is directly related to the timing of the striped bass spawn. May worms provide nearly perfect protein for post-spawn stripers in search of an easy meal to replenish their resources.

Benthic samples tell the true story of dead zones. Starting in 2000 when these areas appeared in earnest, almost 75 locations were sampled inside the dead zone. More than 90 percent contained 0.0 biomass of the worms–they were gone. Frame this with the fact that these creatures don’t need a lot of oxygen. In fact, bottom-dwelling worms typically need very little oxygen compared to almost all other creatures on earth. If the polychaetes can’t survive, neither can shrimp, clams, oysters, or countless other creatures at the low end of the food chain can’t get away from bad water. It is estimated that 75,000 metric tons of “fish food” is lost per year to these low oxygen events.

One other aspect of dead zone can’t be overlooked. As the oxygen is depleted, microbes that don’t require oxygen begin to thrive. These microbes produce hydrogen sulfide. We all know hydrogen sulfide is a poisonous gas. What you might not know is that hydrogen sulfide also changes the pH of the water. We hear a lot about ocean acidification. This is it. The ramifications are catastrophic for shellfish, which have to pull calcium carbonate from the water to grow their shells. As the water becomes more acidic there is less “raw material” available for shell making, and shellfish struggle to survive long after the dead zone takes hold.

So dead zone conditions make it hard for benthic communities, from worms to shellfish, to reestablish populations. Many never do. Without this critical forage, dead zones can’t support the creatures that swam away when the water went bad. They don’t come back. The boom-and-bust algae cycle is often the only sign of life left in the area, and really, it’s a sign of death. 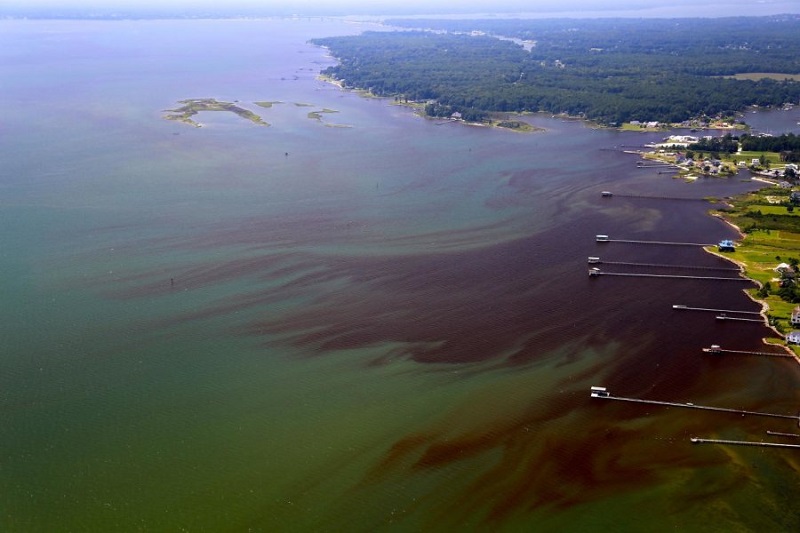