New report, same old story: Our waters are getting worse

New report, same old story: Our waters are getting worse

The Clean Water Act was passed in 1972 with the goal of cleaning up our rivers, streams, lakes and more.

A sobering report by the nonpartisan, nonprofit Environmental Integrity Project found that nearly half the rivers and streams across America “are too polluted to meet standards for swimming and recreation, aquatic life, fish consumption or as drinking water sources.”

Indiana, according to the report, has the dirtiest waterways overall. But Florida, of course, isn’t that far behind:

And the date doesn’t even begin to scratch the surface: every state monitors water quality differently, there are no universal guidelines from the federal Environmental Protection Agency; and “Across the U.S., EIP projects 73 percent of rivers and stream miles have not been assessed during the most recent cycle, the same holding true for 49 percent of lake acres and 24 percent of bay areas.”

So we’re not even measuring a lot of our waters. And what we are measuring are in trouble, and getting worse.

The report includes numerous recommendations, like more/more stringent federal guidelines; and a crackdown on agricultural runoff (where have we heard that before…) particularly where large animal factory farms are concerned:

“Factory-style animal production has become an industry with a massive waste disposal problem and should be regulated like other large industries,” said EIP’s report.

But as is always the case, new regulations require legislators willing to pass the new laws – meaning, they need to be willing to stand up to the entrenched interests that don’t WANT new laws passed, those who tend to be most responsible for the pollution.

In fact, in Florida and likely other places, we’re doing the exact opposite – legislators are making it easier, not harder, for polluters to pollute.

In Florida, newly passed Senate Bill 1000 will allow citrus farmers to hire experts to advise them on fertilizer “rate tailoring” – which will almost certainly result in using more fertilizer than is being used now.

The fear is these increased nutrients will find their way into already impaired waters, worsening pollution. But any suggestion of this during the legislative process was met by great umbrage from backers, who insisted farmers are great stewards of the land and agriculture is such an important industry to the state, citrus in particular, that it must be saved.

And if there’s a cost involved, we and our waters may have no choice but to pay it.

But that comes back to VoteWater’s core message: There IS a choice. We can vote for officials who will prioritize clean water, who realize the importance of clean water to our economy, our lifestyle and indeed our health. We can elect candidates who realize we can’t continue to play catch-up because we’re only losing ground. We can elect candidates who ask: Will it harm our waters further? And if so the answer will be “no.”

Until this happens – don’t expect anything to change. 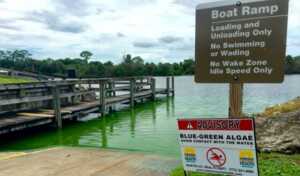