If we were talking baseball, our batting average in the Aug. 23 primary would be fairly impressive: 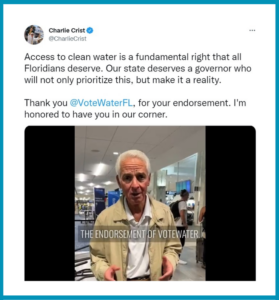 We’re pleased — but not satisfied until clean water is a priority for all candidates, at all levels.

At the top of Tuesday’s ticket was the Democratic gubernatorial primary, where VoteWater’s pick, Charlie Crist, easily bested Nikki Fried, with 59.7% of the vote to Fried’s 35.3%

Crist, who touted our endorsement on social media, did not take money from Big Sugar or other polluting industries this cycle, and on the campaign trail has talked about revisiting plans to buy sugar farms in the Everglades Agricultural Area to restore the Everglades’ historic flow.

Other candidates we endorsed who won Tuesday night:

In addition, two late endorsees in the City of Stuart, where VoteWater is based, won their races for the city commission, incumbent Eula Clarke and newcomer Campbell Rich.

“Congratulations to the endorsed candidates who won, and to those who didn’t, thanks for standing up for clean water,” said VoteWater Executive Director Gil Smart.

Look for the updated guide in early October, a month before the Nov. 8 general election