Lost in the outcry to replace the SFWMD Board of Governors over its attempt to sneak in one last sugarcane land deal at taxpayers’ expense before the Rick Scott era ends is another reason to replace the board: Its announcement in that same public meeting that the district plans to get the sugarcane industry out of its water quality obligations.

Those obligations stemmed from the only real loss the industry has ever suffered in court, although it was the taxpayers who ended up eating the cost of requiring Florida to clean sugarcane runoff polluting the Everglades. The target–maximum phosphorus concentrations of 10 parts per billion–was set 24 years ago in an agreement with the federal government, the consent decree. The industry has no intention of spending its own money to hit that target.

Sugarcane-funded politicians have tried to wriggle out of the consent decree before, and the latest shot at it in Rock Scott’s last days is based on old, vague claims about how clean the water is now. Those claims are false.

First, boasting that 90% (of some) of the water in the system meets the standard is desperate spin… a word politicians use to make lying sound more forgivable. It’s also nonsense.

If your waiter boasted that 90% of the water in your glass did NOT come from the kitchen toilet, would you call that clean enough to drink? (Correct answer: Spring for the bottled water.) It’s not an exact analogy because the waiter is being more honest than SFWMD: The district isn’t saying anything about where the unclean 10% came from, or how much human, animal, and industrial waste is in it.

Even worse is the claim that the water used to be far dirtier, although it’s probably more true. This is like the waiter saying water glasses used to get filled mostly from the toilet, so the restaurant doesn’t need health inspections anymore.

In the last water year (May-April) water leaving the STAs–man-made filter marshes built and run on the public dime to clean runoff above the Everglades–was 3x to 4x more polluted than the consent decree target. So not even close.

Second, it took more than a decade in court to get the federal government to acknowledge that SFWMD and the state of Florida were favoring the sugarcane industry over the interests of the Everglades and the public, and were never going to enforce water quality standards on their own. 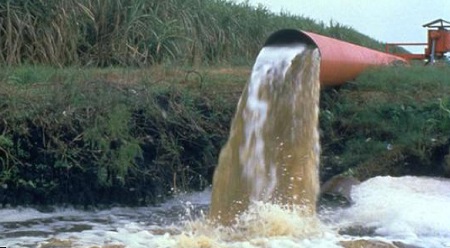 Nothing has changed. Last month’s sneaky lease deal is a minor episode compared to last year’s revelation that a US Sugar lobbyist was actually rewriting SFWMD policy on pollution. Or the bargain-basement, no-bid sugarcane leases to keep public land from being used to reduce toxic discharges.

Under Rick Scott SFWMD leadership dropped any pretense of public accountability. It’s untouchable. Ignoring the governor-elect’s request review an agreement struck in secret with the region’s biggest polluter? Standard operating procedure. Same for blocking email from people criticizing the deal. And for ignoring CBS Miami’s request to talk to board member Federico Fernandez about the deal, and sending Brandon Tucker in his place to duck and stammer through Jim DeFede’s questions. And did board member Dan O’Keefe recuse himself because his firm negotiated the lease? No one seems to know.

If there’s a positive side to these appointees scrambling to get everything they can for the sugarcane’s billionaires while Scott is still governor, it’s publicizing how corrosive this industry has been and how desperately Florida’s needs its next governor to clean house at SFWMD.