Poisoned by the River: Toxic Algae and the Fight to Save Dogs on the St. Lucie

Poisoned by the River: Toxic Algae and the Fight to Save Dogs on the St. Lucie

Ashley Guzi spent the night of September 1st waiting for the news that Costa, her four-year-old golden retriever, was dead. She stared at her phone, thinking about how she’d tell her children.

Meanwhile the staff at Pet Emergency of Martin County in Stuart, Florida were spending the night trying to keep Costa alive. Tests showed her liver was failing, her blood wasn’t clotting normally, and she was bleeding into her stomach. She’d been poisoned. The dog would have died earlier in the day without plasma transfusions, but doctors needed to know what was killing her to give her a real chance of surviving.

As Costa was hanging on, Becky Harris’ miniature Pomeranian, Pandora, wasn’t expected to make it. Harris was asking about in-home euthanasia services, so her dog wouldn’t have to die alone in a hospital. Pandora’s symptoms were identical to Costa’s. She’d thrown up all day, finally so exhausted she couldn’t hold her head up, and her stomach was full of bloody fluid. When her tests came back with ALT scores so high they were almost unreadable, Harris knew what it meant. ALT is an enzyme released when the liver is stressed. The little dog that ran around mischievously on the beach that morning was dying of liver failure.

But Pandora had something going for her that Costa didn’t, as least not yet. Harris knew the cause: “They asked me if she could have eaten sugarless gum or rat poison. I said I knew what it was. It was the catfish she ate.”

Taking walks on the shore of the St. Lucie River was routine for Pandora, and that morning she’d gotten away from Harris and snatched a dead fish in the tideline. It wasn’t surprising that the dog got sick afterward, but Harris never imagined it might kill her. 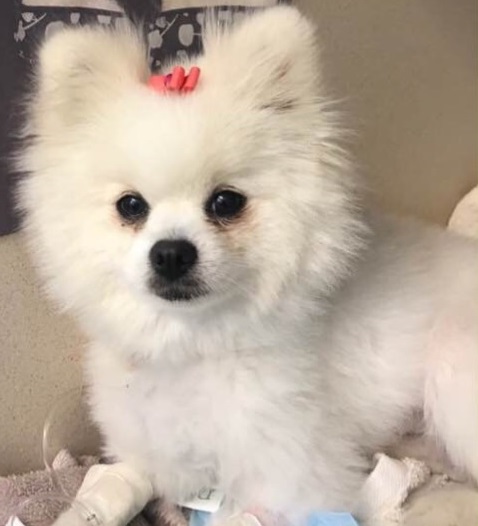 It turned out to be the clue that helped save her life. When the emergency vets reached out to others in the area for information, they found more sick dogs, all living on the banks of the river, all dying of liver failure. The poison was in the water.

“The emergency veterinarians were awesome,” Dr. Cristina Maldonado at Monterey Animal Clinic said, describing the frantic search for what was killing local dogs. “They identified the pathogen and worked out a treatment protocol so fast. They were heroes.”

The evidence pointed to microcystin, a toxin produced by cyanobacteria that had been blooming in the St. Lucie all summer, introduced and fed by freshwater discharges from Lake Okeechobee. As a USGS study confirmed this month, that species of cyanobacteria–Microcystis aeruginosa–can release toxins under stress when it touches saltwater. That means a bloom that might be moderately toxic in the lake could become lethal when it reached the estuary where the dogs lived.

One key source that helped narrow down potential causes was 2,000 miles away. Dr. James Metcalf at Brain Chemistry Labs in Jackson Hole, Wyoming studies cyanobacteria’s impact on human health, and the toxic blooms had drawn him to Stuart to take samples in July. (Metcalf also spoke about the blooms’ risks to local communities on panel organized by Bullsugar.org.) When Maldonado called to ask his opinion, the symptoms she described were immediately familiar.

“From what Cris mentioned to me, and based on previous animal poisonings, microcystins would be a strong candidate,” Metcalf said. Maldonado said he’d also told her that if the clotting problem didn’t kill the dogs, they had a good chance of surviving the poisoning. He was right.

“Pandora is a trained therapy dog, and my deal with God was, If you let her live, we’ll do two therapy visits a week,” Harris said. After four-and-a-half days of intensive treatment, Pandora started eating again. She and Harris started regular therapy visits this month.

And Guzi never got the call she was dreading that night, but the next morning a neighbor helped make the connection her doctors were searching for. Costa had escaped from her yard and ran down to the river early the previous morning. She barely had time to sniff around the shoreline and take a quick drink before the neighbors recognized her and brought her back home, but it was long enough. It took three days for Costa to respond to treatment, but she made it. The dying dog that hadn’t even flinched at injections happily trotted home a week later. 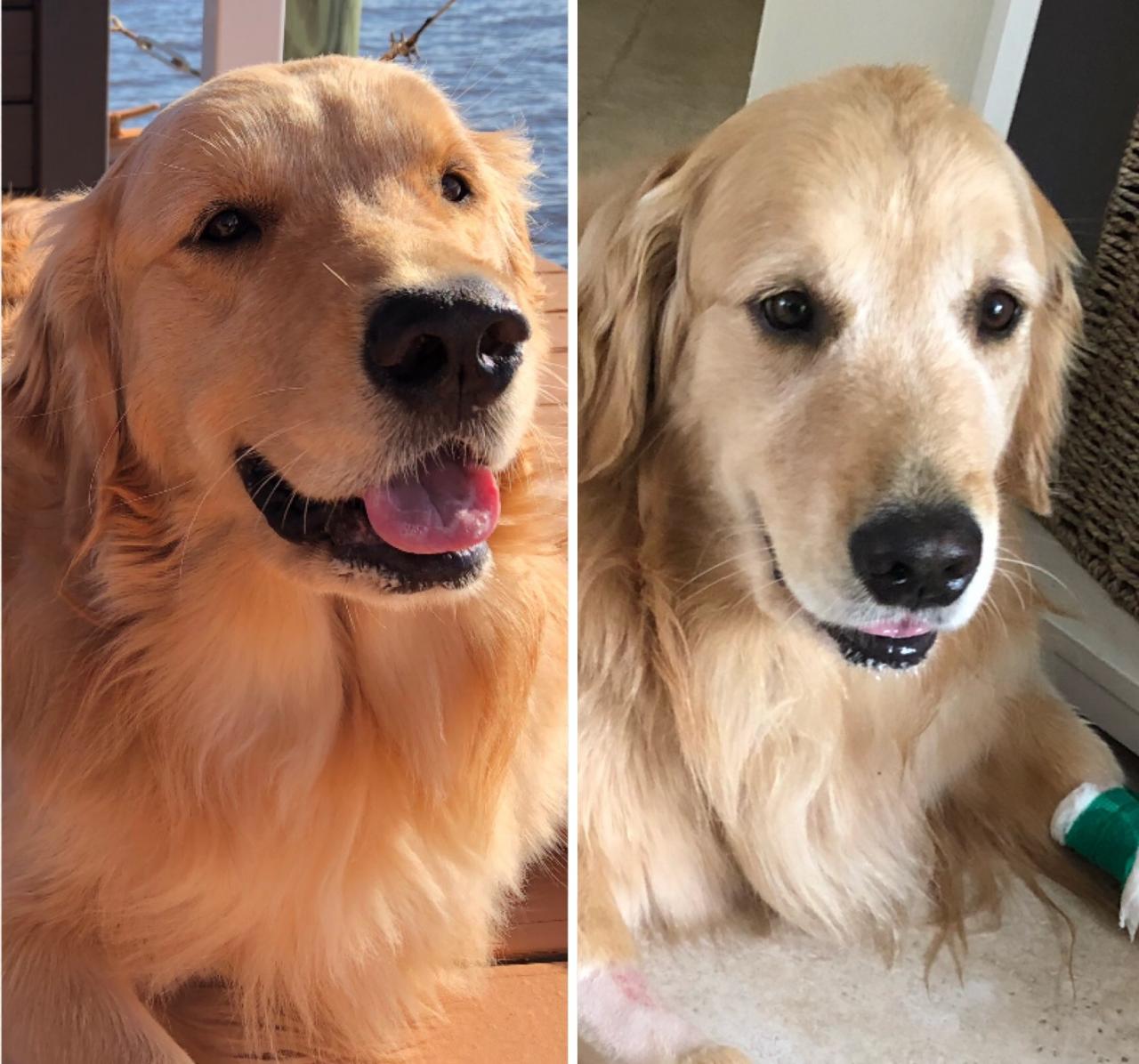 Things aren’t the same, though. “She tires quicker. Her face is whiter now. She aged in a week. She’s on liver supplements for the rest of her life, and the vets aren’t sure what kind of damage was done. They say she might develop liver cancer,” Guzi said. Costa will get quarterly blood tests to monitor her liver, and the other dogs will need the same kind of regular medical attention to track the long-term effects of their poisoning.

At least one local dog wasn’t as lucky. Finn, a nine-year-old standard poodle, died from the same symptoms that Costa and Pandora showed. His owners reported that necropsy results confirmed microcystin poisoning.

To make sure Costa and Apple, the family’s ten-pound dachshund, can’t escape to the river anymore, Guzi built a new double fence, but she feels differently about life on the St. Lucie. “Our dream was to live on the water. When we got here we saw snook, trout, even squid under the dock lights. Everything disappeared when the discharges started. I grew up on this river. We fished and swam in this water. Now I don’t want to go anywhere near it.”

“I don’t understand how a government can allow the poisoning of a community year after year,” Guzi said. So she asked. She sent letters and messages to every government official she could track down. Congressman Brian Mast responded, and Guzi thought he was helpful and sympathetic. She didn’t hear back from others.

She, Harris, and some of the other dog owners met with Mast to find out what they could do. Harris said his advice was clear: Go to the next South Florida Water Management meeting, tell the board of board of governors what’s happening, and ask the agency to send more water south and manage the lake lower to reduce the risk of discharges and toxic blooms.

Harris did just that. “They gave me six minutes to speak. I brought letters, toxicology reports, a map of where the dogs lived. I asked how many people knew about the dogs in Stuart, and about a quarter of the room did.”

The agency’s official response wasn’t comforting. “Some guy on the board said, We’re not picking winners and losers,” Harris said.

The agency’s unofficial response was worse. She knew governing board member Brandon Tucker, so afterward she talked to him about the water and Mast’s legislation to prioritize health in water management decisions–the Stop Harmful Discharges Act (HR 6700). Mast has suggested that storing less water in the lake for the sugarcane industry could reduce discharges. Tucker smiled, she said, and told her, “You know, we’re never going to lower that lake.”

Harris launched a website, toxicdischarges.com, to tell people how to keep responses like Tucker’s from being the final word from government officials. (Tucker himself was appointed by Rick Scott, and while governing board members typically serve four-year terms, Florida’s incoming governor can examine appointees’ performance and accountability. He may question Tucker’s.)

Our next governor might question public agencies’ response to the poisonings, too. Maldonado credited news coverage with alerting area vets to the potential for more microcystin poisonings, but wondered if dog owners would have stayed away from the river if the story had broken sooner. Still, the media was at least a week ahead of Martin County, which notified residents on September 19th that the CDC had issued an animal safety alert warning pet owners to stay away from the St. Lucie River. Finn had been dead for more than two weeks by then.

Guzi worries that residents didn’t take the warnings seriously, even after the the dogs got sick. “The county sent out this blast and people still went tubing on the river, people still went out to the sandbar, they still ate fish out of the river. These dogs are canaries in a coal mine, and we’re ignoring this, and the river’s not betting better.”

Metcalf agrees, partly because humans face the same risks from microcystin. While it’s unlikely that a swimmer would swallow the amount of river water that a thirsty dog might, Costa weighed about seventy-five pounds before she got sick–more than a small child. Asked what would happen if a human got a proportionate dose of the toxin that poisoned Costa, Metcalf said, “if a person were to consume an amount of microcystin at a toxic dose, then similar symptoms to the dogs would be expected.”

Taking the danger seriously only gets harder when toxic blooms recede. When the discharges stop and the cyanobacteria lose their food supply and freshwater, people tend to forget the risks and go back to the river. When sunlight and spring temperatures come back, and especially when the discharges start up again, residents don’t remember to take precautions. That’s the formula for more illness and more dead dogs, doctors warn.

“If your dog lives near the river, don’t ever take this lightly,” Maldonado said. “Vets in this area should know about cyanobacteria now, but everyone needs to be proactive. If you see symptoms, ask for bloodwork to make sure the liver is healthy.”

Legislation requiring government agencies to weigh health risks before discharging water into coastal communities could reduce these dangers almost immediately. Building the infrastructure to redirect discharges into storage and filtration facilities and send clean water to the Everglades can address these risks in the long term–if the new systems have the capacity to offset the volumes that now flow into the St. Lucie and Caloosahatchee. But until those solutions are in place, Lake Okeechobee discharges will create high risks of toxic blooms in our estuaries, and residents and especially pets will remain vulnerable.

As dog owners learned this summer on the St. Lucie, relaxing for even a moment can have life-or-death consequences.