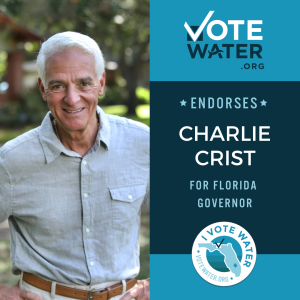 “I’m thrilled to earn the endorsement of VoteWater as we fight to protect Florida’s water and environment for generations to come,” said Crist. “I’m proud to reject the same Big Sugar money that pollutes DeSantis’ campaign. Ron has forgotten that clean water is inextricably linked to Florida’s environment, economy, and way of life. As your next governor, I will always work to keep Florida’s water clean and the economy strong. That includes finishing the job we started on the missing link for Everglades restoration: acquiring sugar land and sending Lake Okeechobee water south.”

Crist’s endorsement and others will be included in VoteWater’s 2022 General Election Voter Guide, to be released online next week at VoteWater.org.

VoteWater, formerly Bullsugar.org, has endorsed both Democrats and Republicans — including DeSantis in his 2018 primary run against Adam Putnam.

But while DeSantis has helped steer record funding to Everglades restoration projects, additional land is needed to store, treat and move water south from Lake Okeechobee to the Everglades — and end, not just reduce, harmful discharges to the St. Lucie and Caloosahatchee estuaries.

Crist has advocated reviving a deal he struck during his previous tenure as governor to buy more than 100,000 acres of sugar fields south of Lake Okeechobee.

“There seems to be this idea that once we’ve completed the EAA Reservoir and other projects in the pipeline, the problem of Lake O discharges will be solved,” said Smart. “But that’s not true, we need more land for water storage and treatment, and Charlie Crist is the only candidate talking about that.”

On the problem of harmful algal blooms, Smart noted that a recent review by a coalition of Florida environmental groups including VoteWater found that just 13% of the Blue-Green Algae Task Force’s recommendations have been adopted.

“Florida convened some of its best scientific minds to tackle the problem, then ignored most of their recommendations,” said Smart. “Charlie Crist is the only gubernatorial candidate talking about adopting all the recommendations to prevent another algae crisis.”
Crist completed VoteWater’s Voting Guide survey, while DeSantis has not yet done so. Crist has signed the group’s “No Big Sugar Money” pledge, which seeks to end the influence of Big Sugar money in politics; DeSantis has not.

Florida campaign finance records show the DeSantis campaign has gotten at least $2.1 million in donations this cycle from PACs which receive significant funding from the sugar industry, including $505,000 from the Florida Prosperity Fund, $400,000 from the Voice of Florida Business PAC, $345,000 from the Associated Industries of Florida PAC and others.

VoteWater staff and volunteers utilized a variety of methods to determine the rankings, including questionnaires, campaign finance data, voting records and public statements on water/environmental issues. The guides will be available at VoteWater.org