John Moran has spent years capturing Florida at it’s most picturesque as a photographer and water advocate based in Gainesville. Lately he’s found himself shooting the state in a whole different light. Toxic slime-covered shores have taken the place of clear, pristine springs and millions of pounds of dead fish have claimed a spotlight that thriving populations of birds and manatees once dominated. Some day, John would like to go back to taking pretty pictures of Florida, but for now he has redirected his passion and talent to help call attention to the ongoing water crisis. 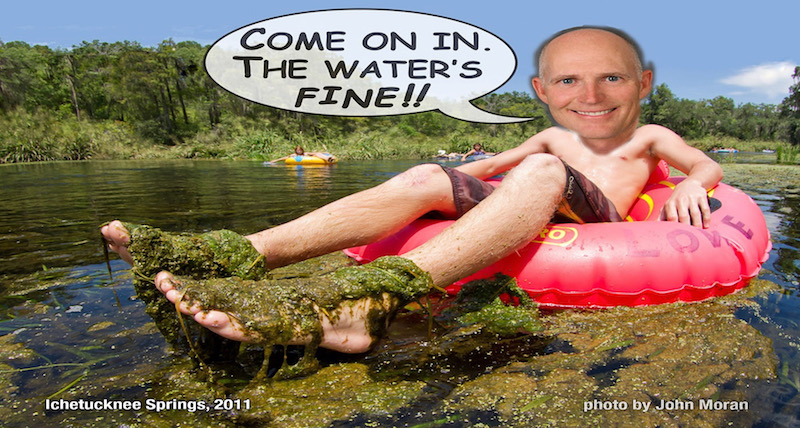 Remembering Rick Scott: Farewell, My Muse
by John Moran, nature photographer, water advocate
As the Rick Scott era in Tallahassee winds down, I’ve been reflecting on the pivotal role the governor has played in my life.
Turning back the clock, the year was 2010. I was a photographer working the bliss and beauty beat, peddling my pictures of pristine Florida to audiences across the state.
Rick Scott was running for governor and riding high. Me? I was nagged by the growing awareness that my relentlessly pretty pictures of flawless Florida were feeding a false narrative.
I’d been watching our waters head south for years but I wanted nothing to do with bearing witness to the changes I’d seen. In the quiet triumph of denial, mine was a dysfunctional love affair with Florida.
Fortunately, when I needed him most, Rick Scott was there for me. The deal was sealed on Earth Day 2011.
That’s the day the new governor boldly put the federal government on notice and told the EPA to back off. To paraphrase, “We don’t need your stinking clean water regulations here in Florida.”
This was a shot across the bow, a powerful statement from our fearless new Deregulator-in-Chief, telling the bureaucrats that we’ve got this covered in Florida—no need for Washington’s meddlesome “numeric nutrient standards.”
The letter from Scott’s environmental protection chief, Herschel Vinyard Jr., continues: “As clearly demonstrated…the State of Florida, including its citizenry, local governments and businesses, is very committed to addressing excess nutrients pollution.”
The governor proclaimed, “Florida continues to lead the nation in developing innovative programs to ensure the health of our state’s waterways.”
Smelling a skunk on that fateful day, my life was transformed. Freed from the shackles of shooting only attractive pictures of my beloved Florida, I headed to the nearest spring and I dove into the task of photographing the ugly truth of the rampant slime I’d been avoiding for a decade or more.
I never used to think of my pictures of beautiful Florida waters as documentary moments frozen in time. Many were “protected” state waters and would remain forever so, or so I believed. Rick Scott’s arrival was my wake-up call.
Thus reborn with purpose and passion, I joined the growing community of dedicated Florida water defenders.
In fairness to the governor, he didn’t create Florida’s water problems. He just made them worse.
Rick Scott’s environmental legacy reflects a policy of purposeful neglect; the details of which have been much discussed in the public arena in this, our 2018 Toxic Summer of Slime.
Slashing and burning his way through the infrastructure of environmental protection four decades in the making, his record reveals a regard for Florida—the real Florida—as just another commodity to be exploited for profit.
And how has the governor responded when confronted with the slime-encrusted consequences of his actions? Can you say, Stand Your Ground? Rick Scott blames the Feds, and the man whose job he covets.
I ask you, tell me an issue more important to Florida’s future than protecting our waters. Look around. Do you see evidence of a state committed to getting the water right?
The governor offers the fig leaf that red tide is “naturally occurring.” But here’s the punchline: we have super-charged our toxic algae outbreaks with lifestyle choices and business practices that have sacrificed our public waters on the altar of personal choice and financial gain.
When it comes to Florida’s waters, fertilizer is Public Enemy No. 1. But have you ever once heard Governor Scott speak the word “prevention”? As in, “let’s stop this pollution at its source.”
Here’s what occurs naturally: We the people resist dealing with the hard stuff even when it’s clear the problems will only get worse.
That may be human nature but wise politicians don’t pander, and they don’t pass the buck. Wise politicians understand that an ounce of prevention is worth a pound of cure, and they govern accordingly. It’s called leadership.
Thomas Jefferson cautions us from the grave, “The government you elect is the government you deserve.”
If you believe that Rick Scott is the governor we deserve, then the message to our children is they deserve no better than to inherit a state in which our pristine waters can be found only in old pictures and fading memories.
History will judge whether Rick Scott is the worst governor we’ve ever had. In the meantime, he’s earned my vote. The man has done serious damage to Florida—and the Florida brand—and it’s time to end the abuse.
We need our next governor to be Florida’s Cheerleader-in-Chief for real conservation and civic water education, delivered from the heart. For the measure of a civilization is not merely what it creates but what it refuses to destroy.
You can go home to Naples now, Governor. Your work here is done.
Back to News