The following article is set to appear in the April edition of Florida Sportsman Magazine. It is reprinted with permission here. 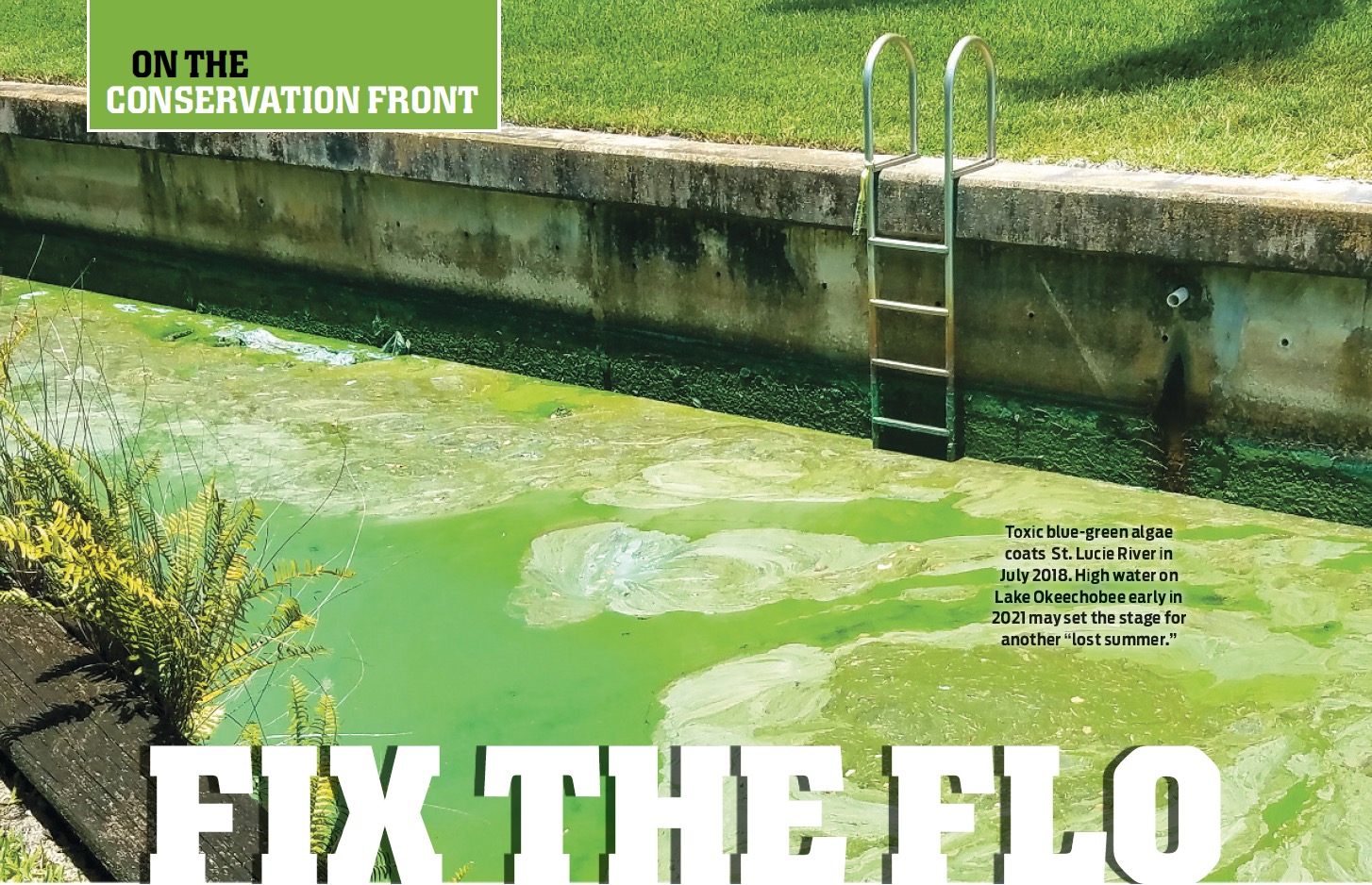 Send Lake O water south, before the rainy season,to prevent harmful discharges to the coasts: How it can be done, now.

Significant plans to restore the Everglades and stop the damaging discharges to the coastal estuaries have been forged with hope and promise over the last three decades. But here we are, looking at the prospects of another disastrous year for the estuaries—and still very little water flowing into the ‘Glades.

It’s time to act. Too much water has been kept in Lake Okeechobee. We need to demand that all efforts are made to begin sending as much Lake water as possible into the Stormwater Treatment Areas (STAs), from now until June 1, in an effort to lower the lake in advance of the upcoming wet season. This action is vital to avoiding another year of toxic and ecologically destructive algae blooms on southern Florida coasts, as witnessed most recently in 2018 .

The STAs are a patchwork of wetlands managed in the southern Florida peninsula for the purpose of treating runoff and reducing nutrient inputs into the Everglades. They were constructed starting in the mid 1990s to help mitigate Florida’s legacy of drain-and-fertilize farming practices, practices which benefited sugarcane growers south of Lake Okeechobee at the expense of the South Florida environment.

From 2009-2019, Lake Okeechobee inflows into the STAs averaged 191,957 acre feet, about 16 percent of the water flowing into the STAs. The vast majority came from primarily sugarcane fields (400,000 acres) in the Everglades Agricultural Area (EAA).

However, eerily like in 2018 when Lake inflows were only 9 percent, we have even less in 2021 at 6 percent of the inflows into the STAs. Translation: The Lake is too high and there’s a very real prospect that we’re headed for another summer of coastal habitat destruction and human health consequences.

The situation has caused alarm at the City of Stuart, one of the primary downstream recipients of the toxic lake discharges. In a letter addressed to the South Florida Water Management District Governing Board, dated February 24, 2021, the City of Stuart made their concerns public, stating: “The critical importance of conveying this volume of lake water south before the wet season cannot be overstated. The prolonged absence of capacity to store and treat additional lake water in the STAs will only compound stressors for the rest of the system.”

Vice Mayor Merritt Matheson, the lead author of the letter, and leading voice of the city in their efforts to end the toxic discharges continued: “At a recent SFWMD Governing Board meeting, Mr. Lawrence Glenn presented evidence illustrating that while 1,537,000 acre-feet of local EAA basin runoff was treated within the STAs, just 98,400 acre-feet of lake water (or 6% of total) was treated thus far in Water Year 2021 (May 1, 2020 – February 7, 2021). 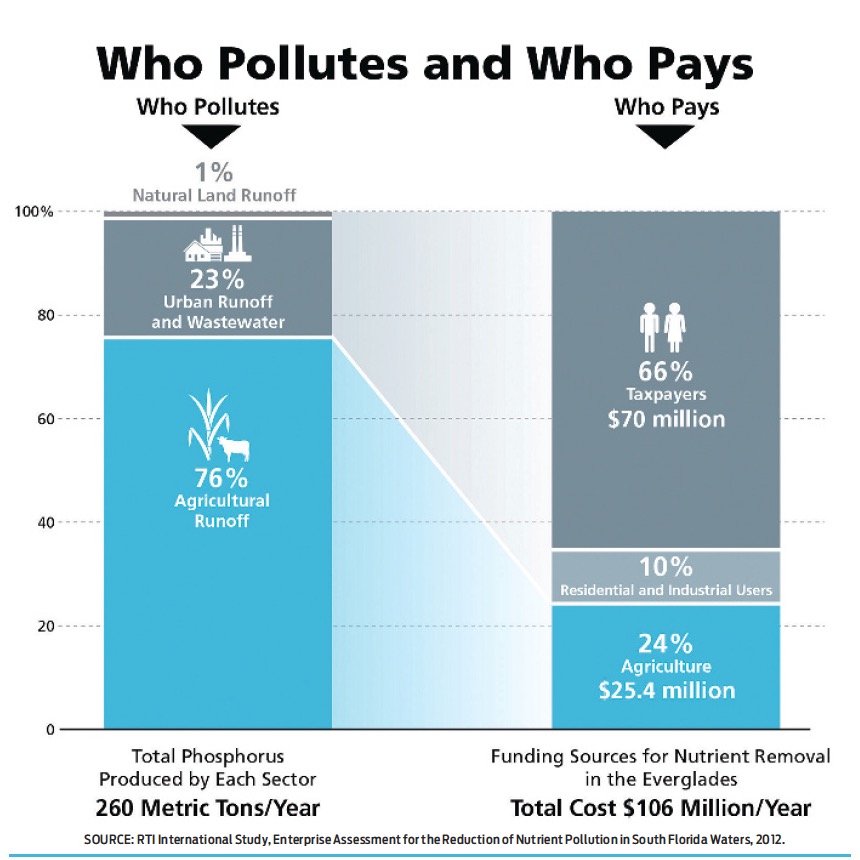 “The ratio of lake water to basin runoff treated within the STAs remains neither equitable nor adequate. Unfortunately, the consequence of this unanticipated outcome has been felt greatly in the coastal estuaries, Florida Bay, and the Everglades,” the letter continued. “Both stormwater treatment areas and water conservation areas alike were financed with public funding, but so long as the EAA is the primary and near-exclusive beneficiary of this infrastructure, lake water will continue to be discharged to our community and at the expense of our economy and natural environment.”

Gary Goforth, P.E., Ph.D. who was the Chief Consulting Engineer during the design, construction and operation of the $700 million Everglades Construction Project, said that the 1994 Everglades Forever Act and the STA construction documents that came after it, call for an average flow of Lake O water to the STAs of about 250,000 acre feet. And that was based on 40,000 or so acres of STAs; now we have about 60,000 acres. So, you’d think you’d even see more Lake Okeechobee water flowing south, not less.

Goforth went on to say, “The South Florida Water Management District will make typical answers as to why they aren’t sending more lake water south: First, they’ll say there’s been a lot of rain south of the lake that’s filled up the system of STAs and WCAs. Which our response should be: Sure, but as the dry season progresses, the system will dry up, and space will become available, especially with the EAA sending little or no water south because they need it for irrigation.”

“Second,” Goforth continued. “They’ll say cells in the STAs need to be taken offline so they can recover from all the water they’ve gotten during the wet season. And our response should be: Why should the health of STA cells be given higher priority than the health of the estuaries?”

The City of Stuart’s letter concluded with this plea: “…we urge the Governing Board to use every tool and resource available to it, and by and with the cooperation of the Army Corps, minimize discharges to the Saint Lucie Estuary by maximizing water flow from Lake Okeechobee south through the STAs and the Everglades throughout this dry season.” 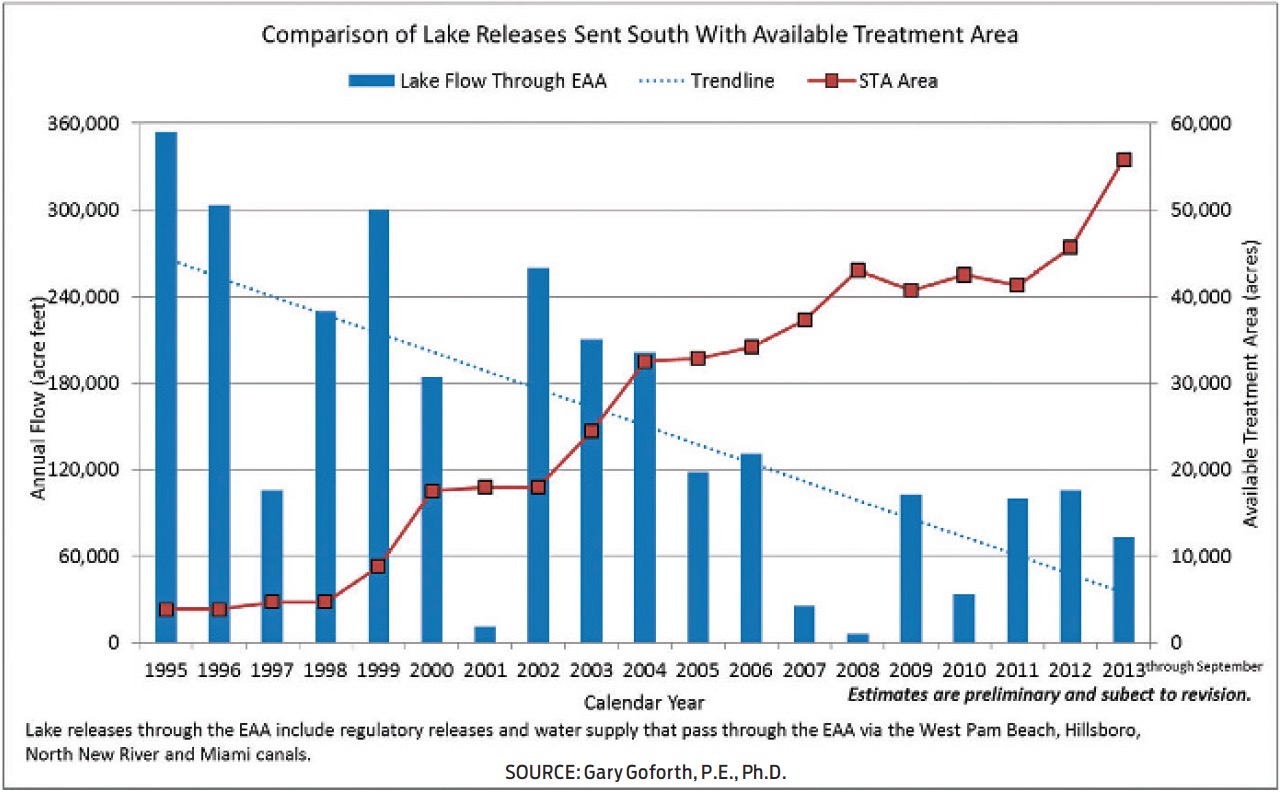 Demanding water flow south right now may help prevent disaster this year, but what about next year and the year after that? Fortunately, there’s a plan in the works that addresses operations. But we need to help make it a plan that works for the people of Florida and not for a single industry, the sugar Industry.

Currently, the U.S. Army Corps of Engineers (USACE) is past the halfway point of a fouryear project re-evaluating Lake Okeechobee operations to coincide with the completion of Herbert Hoover Dike (HHD) rehabilitation in 2022. The Lake Okeechobee System Operating Manual (LOSOM) effort will re-examine the opportunities to balance the congressionally authorized project purposes for flood control, water supply, navigation, recreation, and preservation of fish and wildlife resources.

We need to put our imprint on this manual which could very well tip the operational schedule of the Lake Okeechobee system in favor of ecology and the environment instead of the decade’s long winner, Big Sugar.

“The current lake management schedule results in millions of people being needlessly exposed to water that the Army Corps has acknowledged is toxic to human health, while at the same time starving Florida Bay and the Everglades of water needed for environmental restoration,” explained U.S. Congressman Brian Mast, representing Florida’s 18th District. “The Army Corps must seize this once in a decade opportunity to fix this problem. Their own data shows it’s possible to do while also improving water supply for Floridians, so there’s no excuse not to.”

At press time for this column, the USACE was down to considering 27,000 [!] models, alternatives. But, there’s one set of models that make the biggest impact to the health of our estuaries by sending more Lake water south, and that’s the 4C-1 models, specifically plan 22448.

Please contact the U.S. Army Corps of Engineers and demand they do the right thing for the people of Florida, for the critters of Florida. FS

Tell the Army Corps of Engineers, Water Management District, and your elected officials to FIX THE FLO.