Toxic blue-green algae on Lake Okeechobee isn’t just a problem for the lake, or for the St. Lucie and Caloosahatchee when those estuaries are being blasted with discharges from the lake full of cyanobacteria. 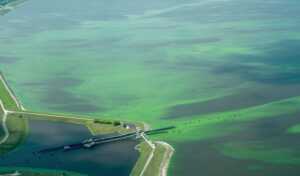 Increasingly, as this article in the Palm Beach Post notes, it’s a growing problem for the City of West Palm Beach:

Lake Okeechobee has long suffered blooms of cyanobacteria — commonly referred to as blue-green algae. West Palm Beach monitors for signs of the common microcystin toxin, which is known for producing smelly scab-like cakes on the water’s surface.

When the toxin was detected in water coming from Lake Okeechobee in April of last year, the city shut off the flow into Grassy Waters Preserve to protect it from infection.

Emails between city officials reflect the growing concern at the time about how a lack of Lake Okeechobee water would affect the city’s supply during the prolonged dry season.

West Palm Beach sided with “water supply” interests during the recent dust-up over Senate Bill 2508. The city relies on “surface water” from the lake, which feeds into Grassy Waters Preserve, from which the city draws much of its water.

So in one respect, it made sense city officials should be concerned that the U.S. Army Corps of Engineers’ new Lake Okeechobee System Operating Manual could – maybe – force the city to endure cutbacks if the lake is kept too low and a drought ensues.

But the article linked above tells us that quantity – having enough water – isn’t the city’s only problem. Water QUALITY is another, perhaps bigger problem.

Lake Okeechobee, with harmful algae blooms that are becoming annual events – triggered in part by heaven-knows-how-high nutrient levels in the muck at the bottom of the lake – may never again be be the pristine source of water the city requires.

So the article goes on to talk about how this, coupled with aging water-supply infrastructure, has forced the city to look at drawing from the Floridan Aquifer.

That would require lots of study and permits and such. But there’s good reason to pursue it:

But in Florida, about 98% of the drinking water supply is from groundwater, according to a 2020 presentation given to the state’s Blue-Green Algae Task Force by Florida Department of Health toxicologist Kendra Goff.

“I am surprised West Palm Beach is still on surface water because there are so many alternatives,” said Florida Atlantic University research professor J. William Louda, who specializes in cyanobacteria. …

“We are just too many people in a condensed area,” he said. …

“Anything the city can think of as alternatives to simply relying on Lake Okeechobee water is a good thing,” said Chip Block, chairman of Palm Beach County’s Water Resources Task Force and vice-mayor of Jupiter Inlet Colony. “With all this money coming in, it behooves everyone to look forward to try and prevent a crisis before it happens.”

So this raises a very interesting question.

As noted, West Palm Beach has sided with “water supply” – led by, of course, Big Sugar.

But what if West Palm Beach, down the line, didn’t need it for municipal water supply – or didn’t need as much of it?

Senate Bill 2508, and all the machinations surrounding it, was designed in part to ensure plentiful water in the lake to placate “water supply” interests, even if that means a greater chance of harm to the lake ecology and to the estuaries when they get blasted with discharges.

But if West Palm Beach seek to diversify its sources of municipal water, it won’t be as reliant on Lake O water supply.

Water managers would therefore not need to be quite so concerned about keeping the lake artificially high.

The lake could be kept lower – reducing ecological damage to the lake, the need for discharges and the chance of another algae crisis.

None of this has been factored into the haggling over Lake O water levels. Indeed, West Palm Beach officials held a press conference last week to urge the Legislature to pass SB 2508. Officials pleaded: Don’t leave us high and dry.

But harmful algal blooms on Lake O might do just that. It’s no use keeping ever-more water in the lake if that water is contaminated and your aging infrastructure can’t handle the strain.