Political courage can fix Florida’s water crisis. No longer should Floridians tolerate threats to their health from outdated water-management policy that neglects their best interest. Environmental degradation contributes to the collapse of community businesses and threatens to end a way of life, tied to the water, and deeply ingrained in generations of residents and visitors.

There is a way forward. And Florida voters hold the key. We’re already seeing a glimpse of the success that’s possible. Thanks to insistent pressure by the public and a few courageous lawmakers, the Army Corps is changing the way they manage Lake Okeechobee specifically to prevent harmful health effects from toxic algae.

To ensure real relief to communities that suffer year after year, we need to make sure that momentum doesn’t stop. Our most precious public resource, and its inextricable links to public health and a thriving economy, requires committed, bipartisan support. The future of Florida is dependent on more leaders from both sides of the aisle stepping up.

The following column will appear in the August/September edition of the largest fishing magazine in the state, Florida Sportsman. With an audience of hundreds of thousands of Floridians, it outlines the critical timing of the approaching elections and the necessity of backing clean-water candidates. It is reprinted with permission and can be viewed in full HERE.

Help us power the VoteWater campaign by donating today!

“Florida’s Water crisis is a political problem and requires a political solution. The science is settled, and the time to fix the problem is now.”

The headline above is from the front page of VoteWater.org’s website. It’s worth repeating if you want to stop kicking the proverbial can down the road. Say it again, “Florida’s water crisis is a political problem and requires a political solution,” meaning we need to vote out the can-kicking bums who will not prioritize the health of our waters. “The science is settled” meaning we don’t need any more studies. We know what’s causing the pollution and we know what can save our estuaries. And ﬁnally, “and the time to ﬁx it is now,” why not? None of us are getting any younger.

This isn’t a partisan issue. Both parties in Florida are equal opportunity offenders. The solution comes when we break from the Red and Blue teams and join the Water Team.

The Water Team has something for everyone. If you’re ﬁscally conservative, hate handouts and 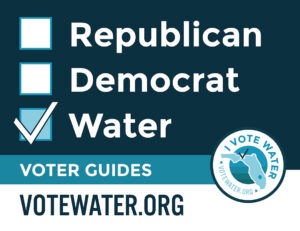 want to grow business to help drive sales tax revenue to balance Florida’s $92 billion dollar budget, you’ve got no better team. Clean, healthy water is the economic engine that runs on its own. No industry in Florida contributes more in tax revenue than the tourism, ﬁshing and boating industries. The Water Team is also for dumping corporate welfare for Sugar and stopping the price supports for an industry that takes so much and gives so little.

For the progressives out there, the Water Team is steadfast against special interests having an outsized inﬂuence on our state’s politicians. The W’s also want and will ﬁght for the environment and ecology of the state. And the W’s will ﬁght unchecked growth.

Who’s ready to join the fight for clean water by electing politicians, at all levels of government, committed to: restoring the Everglades, holding polluters accountable, making human health a priority, fully funding pollution monitoring and enforcement, staying “sugar-free,” lowering Lake Okeechobee during the dry season, holding phosphate companies responsible for their pollution and for prioritizing above-ground water storage and conveyance instead of injection wells.

Does this sound like a platform you’d support? Are you ready to ﬁght? Pick your teammates. Go to VoteWater.org and ﬁnd out who you should be voting for. The organization doesn’t cover every county or every important race, but Bullsugar president Richard Trotta says the VoteWater team plans to in the future. “We’ve got volunteers from the northern Indian River Lagoon all the way to the Keys and up to Tampa Bay. Next cycle we’ll cover the entire state,” committed Trotta.

Many of the all-important local and state races will be decided during the primaries, this month, August 18th. Don’t let the bums continue to kick the can. Go to VoteWater.org and bring about immediate change, where it matters most, in the water. 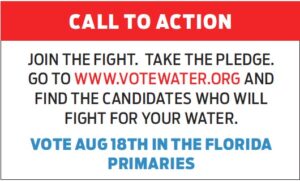 These efforts are powered by people like you who care about the future of our water. If you can, please chip in today to help us find and support political candidates from both parties willing to stand up for clean water.