This week, the City of Stuart put on an admirable display of political will, voting unanimously to seek legal and scientific expert advice to sharpen a lawsuit aimed at the Army Corps of Engineers over its operational management of Lake Okeechobee water levels. 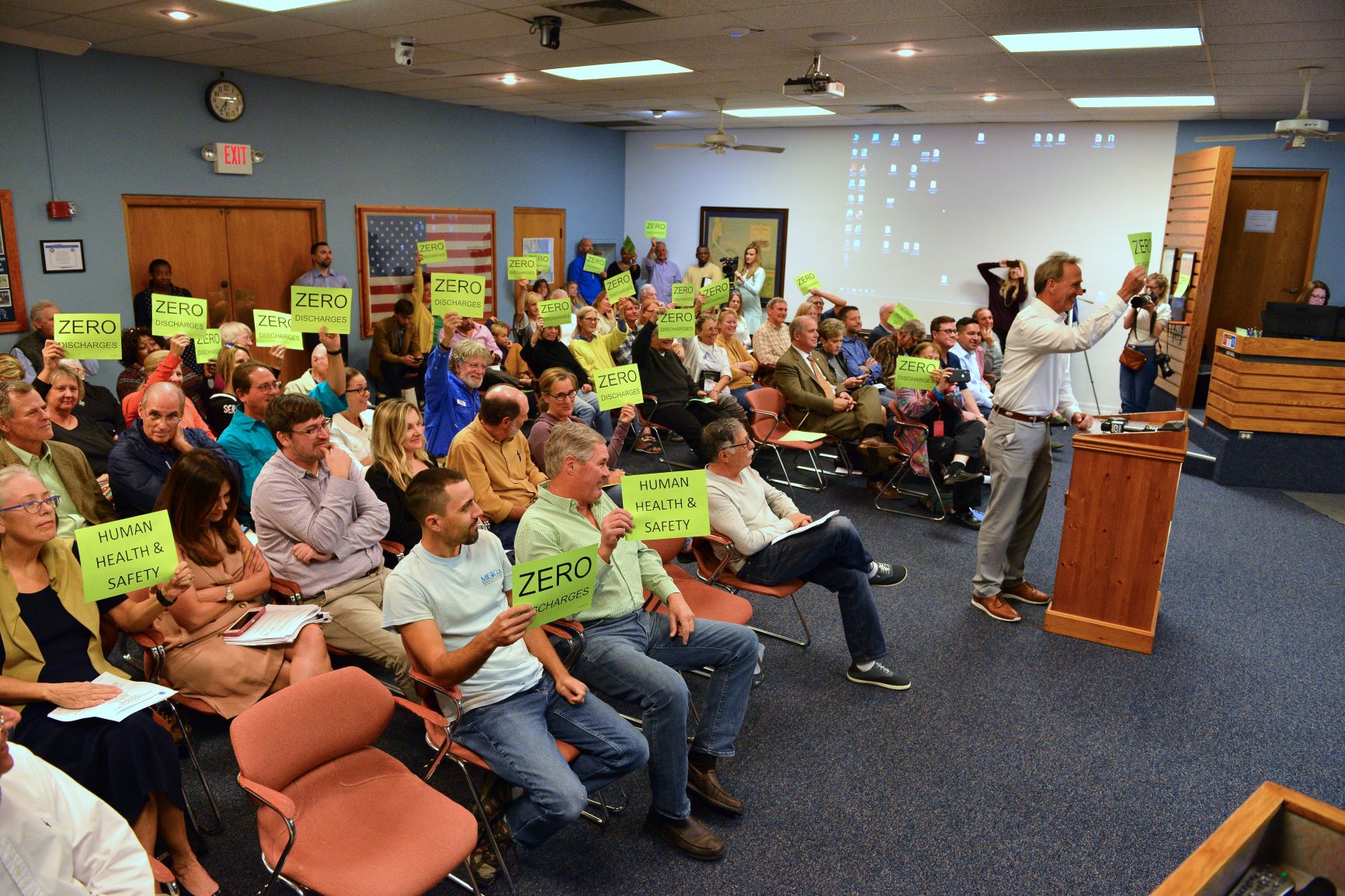 The decision was met with a sense of overwhelming appreciation from a beleaguered public all too used to the repercussions of current water management. While many long term projects remain years away from promised benefits, a shift in the operational management of Lake O is being hailed as a potentially giant step towards providing immediate relief for coastal communities.
Not every voice in the crowd was in support of the lawsuit. It became evident that the City of Stuart and the Martin County Commission are using very different playbooks on how to address this year’s impending danger of discharges. Finding “time is of the essence,” the Stuart City Commissioners favored their imminent lawsuit challenging the Army Corps’ refusal to use more flexibility to set lake levels, while Martin County Commission representatives expressed an aversion to legal action, preferring instead to take a long term approach that focuses on influencing new lake regulations to take place in 2022. The stark difference in approach is proof of how far we still have to go.
It is well apparent that at this moment, at issue is not only the immediate health of the people, economies, rivers, and estuaries of affected areas, but the question, inevitably, of political will. In a decades-old battle that has produced too few political heroes, the city’s stand to protect the health and safety of its residents is setting a time-sensitive precedent for the rest of the state, providing an example for other elected officials to follow. The question remains who will rise to the challenge of joining them.
The following piece, written by former Lee County Commissioner, Ray Judah, echoes the dilemma we face on both coasts. With momentum building, the time is now for elected officials across the state to follow the City of Stuart’s lead and band together to protect imperiled environments and the health and safety of all Floridians.
(Original work written by Ray Judah, former Lee County Commissioner. Published on 1/21/2020 by the Naples Daily News, available online here.)
Cities Should Oppose Corps Water Policy
CORRECTION: A previous version of this op-ed erroneously referred to Kevin Ruane as the president of the Florida League of Cities. Mr. Ruane is president of the Florida League of Mayors.
For decades, the sugar industry has convinced state and federal regulatory agencies to retain high water levels in Lake Okeechobee prior to the summer wet season to ensure sufficient water supply to irrigate sugar cane fields as insurance against possible drought conditions.
Coastal communities on the west and east coast of south Florida have voiced concern that minimum flows should be released from Lake Okeechobee prior to the summer rains to protect downstream estuaries from experiencing damaging excessive saline conditions and to minimize excessive discharge of polluted water during the rainy season.
Last year, the U.S. Army Corps of Engineers (USACOE) attempted to provide a balanced water management approach by authorizing pulse releases of water from Lake Okeechobee prior to the wet season. Such action lowered the water levels in Lake Okeechobee when the risk of toxic algae was low providing greater protection to coastal estuaries from excessive release of polluted water later in the summer.
The USACOE strategy worked and our coastal estuaries fared better than in previous years when the USACOE had no choice but to dump excessive volumes of polluted water from Lake Okeechobee to protect the integrity of the Herbert Hoover Dike. Unfortunately, with a recent change in command, the USACOE has announced that its 2020 water management strategy would revert back to favoring water supply for the sugar industry over critical environmental releases.
On January 14, the City of Stuart voted to move forward with drafting a complaint to sue the USACOE over their announced 2020 Lake Okeechobee management strategy.
To date, Lee County government and municipalities that have suffered severe economic and environmental consequences from harmful algae blooms have remained silent. Furthermore, City of Sanibel mayor and president of Florida League of Mayors Kevin Ruane is in a unique position to coordinate with coastal cities, including the City of Stuart, to mobilize efforts to prevent the sugar industry from undermining responsible management of the Lake Okeechobee watershed.
Local west coast communities and grassroots organizations, including Captains for Clean Water, need to coordinate with coastal communities on the east coast and around Florida Bay and Florida Keys to help guide the USACOE in getting the water right.
– Ray Judah, former Lee County Commissioner
Back to News