Will Sugar’s Influence Be Allowed to Derail Progress in 2020?

Will Sugar’s Influence Be Allowed to Derail Progress in 2020?

As we enter a new decade, Florida residents are finding themselves at a pivotal crossroad: will they continue to be targets of toxic Lake Okeechobee discharges, or will state and federal water managers finally break free from the decades-long vice grip of Big Sugar and start standing up for human health and safety? In a longer than usual update, we’ve provided a synopsis of some of the most significant details and events that have led us to this critical moment in Florida water history. 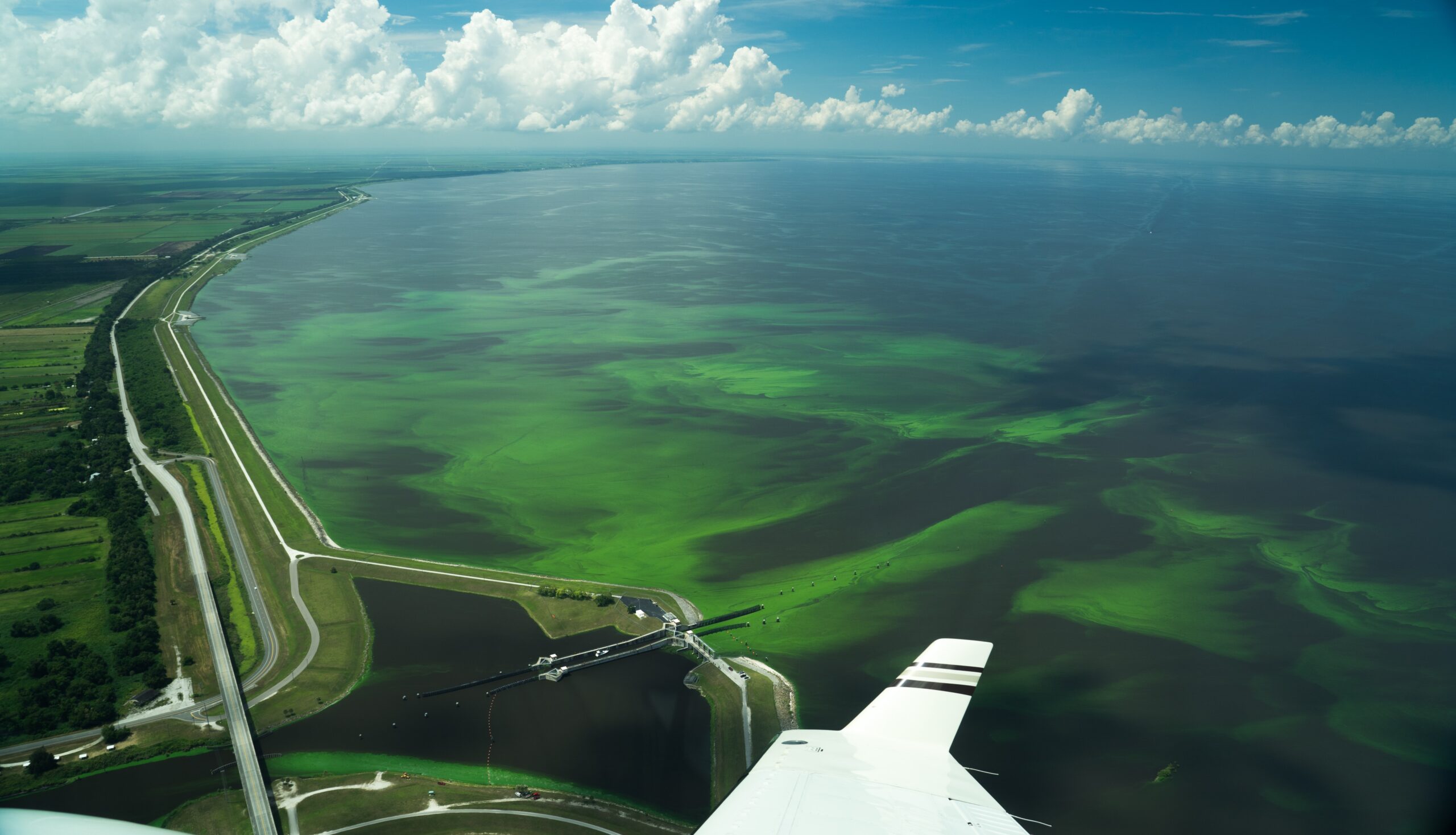 During most of Rick Scott’s reign as governor, the South Florida Water Management District (SFWMD) and the Army Corps stood by in willful neglect as the coastal communities were swamped by Lake O’s nutrient-filled dirty water and harmful algal blooms. Both government entities are guilty of ignoring the distress and pleas from the coasts, claiming to be hamstrung by governing regulations that prioritized water storage for irrigation purposes and set water levels for the lake that almost guaranteed the need for discharges.

For decades, the heavily pro-sugar culture in the government agencies endorsed the cyclical pattern of maintaining high lake levels during the dry season for water supply, and then discharging the water east and west in the name of flood control when the lake got too high during the wet season. As the coasts suffered, the sugar industry enjoyed successful harvests year after year, never lacking for irrigation regardless of the weather.

In the 2018 election year, Floridians had had enough, and the debate over the discharges finally spilled into the political arena. Notably, U.S. Representative Brian Mast, stepped up to voice the frustrations of his Stuart-based district, doggedly asking the Army Corps hard questions about operational decisions that risked human health. His efforts were not in vain.

Following a disastrous summer, the Army Corps began to release more water than customary during the dry season, deliberately drawing the lake level down in anticipation of the following wet season. Instead of being warehoused in the lake, water went west to the Caloosahatchee to help balance dry season salinity levels. An unfortunate amount of it was also pushed east to the St. Lucie where it was unnecessary but acknowledged to be less harmful at that time, rather than later when the chance of toxic algae was higher. Had the Corps started even earlier in the year, the water sent to the St. Lucie could have instead been cleaned and sent south, where Everglades National Park and Florida Bay remain parched for clean, fresh water.

The deviation from normal water management was historic. Using operational flexibility that led  to a lower lake, the Army Corps broke the perpetual cycle of dry season high water storage and wet season flood control discharges. The political tide-change continued when newly-elected Governor DeSantis demanded the resignation of the sitting SFWMD Board of Governors. The pro-sugar Scott-appointees were replaced by board members who promised to take a more balanced perspective on water management.

Last summer’s reprieve was applauded statewide, but one special interest was already on the counter-attack.

In August 2019, following the successful deviation, U.S. Sugar sued the Army Corps, demanding the Corps “reign in its rogue operations” and continue its dry season high water storage policy.  Its message to coastal communities may as well have been ‘we want our ample water supply and we don’t care if you suffer discharges as a result.’ Though not legally successful, the suit got the Corps’ attention. In December, as coastal communities celebrated a wet season without massive discharges (finally!), the Corps announced that its 2020 focus would return to “retaining water during the dry season.”

The unwelcome news spurred action. This week, the Stuart City Commission is moving forward with drafting a lawsuit to challenge the Corps’ preference for lake water storage over protecting the health and safety of coastal communities by risking discharges. The Commission is advocating for operational management that releases lake water now, mirroring last dry season, to reduce the upcoming wet season water level. One Commissioner has urgently stated, “time is of the essence.”

Even as the Stuart City Commission boldly seeks immediate solutions to this year’s threat of discharges, concerns remain about the long term management of the lake to be shaped by a regulatory document known as LOSOM (Lake Okeechobee System Operating Manual).

The future importance of LOSOM cannot be underscored enough.

The successor to LORS 2008, the LOSOM water management guidelines will set the parameters for the Lake’s future water usage priorities and lake levels and will be adopted in 2022. The Army Corps has sought public input on LOSOM and is currently giving government officials an opportunity to provide input through Project Deliver Team (PDT) meetings. As defined by the Army Corps, LOSOM PDT members include only “federal officials and elected officers of state, local and tribal governments or their designated employees with authority to act on their behalf acting in their official capacities.”

Unfortunately, not all government officials are following PDT attendee guidelines. It is highly disappointing that Agricultural Commissioner Nikki Fried has appointed three sugar lobbyists to represent her department at PDT meetings. The historically slanted influence of the industry gives rise to a clear conflict of interest and Bullsugar has joined a number of other advocacy organizations in calling for the immediate removal of the lobbyists.

The participation of well-known sugar lobbyists in meetings allegedly restricted to government officials reeks of the SFWMD’s past clubby interactions between public and private officials. All three in question now are or have been employed at MacVicar Consulting, an engineering consulting firm located down the road from the SFWMD that was once infamously dubbed “the shadow district” for its pervasive influence over the past governing boards. Its namesake, Thomas MacVicar, a previous employee of the SFWMD, has been featured as a speaker and expert at  many SFWMD events, despite his well known sugar advocacy. Given this history, Commissioner Fried’s office will have to excuse the confusion and outrage. In the present situation, the public deserves an honest answer–are MacVicar and his fellow lobbyists there to represent the interests of the Department of Agriculture or the Florida Sugar Cane League–or both?

When it comes to the influence of Florida’s sugar industry, it really doesn’t matter whether Commissioner Fried is a Republican or a Democrat. After all, it’s no secret that Big Sugar plays both sides of the aisle. What does matter is the signal she’s sending to the rest of the world with her choice of representation. One might have expected as much from former Agricultural Commissioner Adam Putnam (who kept MacVicar Consulting on the department payroll), or from her vanquished sugared-up opponent, Matt Caldwell, but these appointments shine a contradictory light on her winning campaign ad where she stated, “[w]hat if instead of tolerating green algae and red tide – our leaders prioritized keeping Florida’s water blue.”

Perhaps Commissioner Fried needs to be reminded that the coastal targets of discharges just experienced blue water for the first time in many years, and then the sugar industry sued the Army Corps for making the blue waters possible.

There is no time to waste. Statewide, elected officials must find the political will–as the Stuart City Commission just did–to fight for the health and safety of Florida residents by pushing for lower lake levels now that will reduce the risk of toxic discharges later.

In the longer term, we must push for a fair LOSOM PDT process that should exclude private industry lobbyists. Residents should ask their political representatives at all levels whether they are participating in LOSOM. And if they are not, demand an explanation why.

The Army Corps proved that with advanced planning it could hold off the damaging discharges. They must be encouraged to do the same in the future. By continuing to ask hard questions of the SFWMD and the Army Corps, we can force them to choose whether today’s water managers go down in history as clean water champions or toxic discharge agents.