Our Voter Guides are out. Here’s how we decided to endorse Charlie Crist

Our Voter Guides are out. Here’s how we decided to endorse Charlie Crist 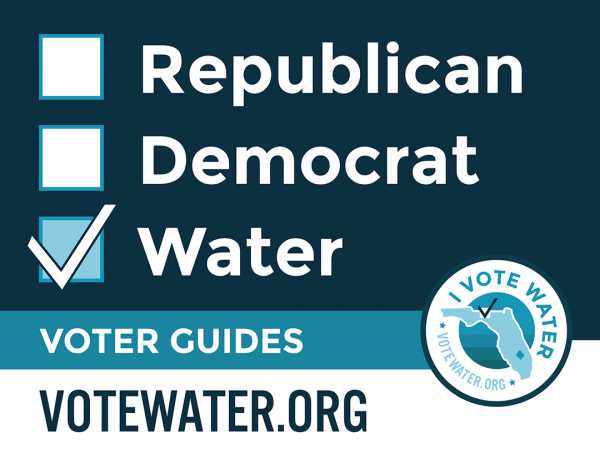 If you live in Brevard, Broward, Charlotte, Collier, Hillsborough, Indian River, Lee, Manatee, Martin, Miami-Dade, Monroe, Palm Beach, Pinellas, Sarasota or St. Lucie counties, we’ve got you covered with candidate rankings, a look at whether (or how much) “dirty money” your local candidates got from polluting industries, and more.

“Favored” candidates received one “check,” meaning they’re a pretty good bet for clean water. Two checks indicate we “support” a candidate, based on their answers to our questionnaire, campaign finance data, voting records and public statements on clean water issues.

Three checks were reserved for candidates we chose to endorse, on the basis of those criteria.

In the Florida Senate, we endorsed Eunic Ortiz, Democratic candidate in District 18.

Our pick, announced last week, ignited a firestorm. It was both applauded and condemned on social media; dozens of VoteWater supporters emailed to tell us how wrong we were.

In this era of extreme partisan politics, this was to be expected. But in fact, we didn’t back Crist because he’s a Democrat. Based on our criteria, we simply found him to be the better choice.

Moreover, if you check our Voter Guide you’ll see we deem DeSantis a “favored” candidate.

He has done some very good things for our waters. Upon taking office in 2018 he was fast out of the gate — forcing the resignation of the South Florida Water Management Governing Board and appointing a new board far less beholden to corporate sugar interests.

Recognizing the threat posed by toxic algae, he appointed the Harmful Algal Bloom/red tide Task Force and the Blue-Green Algae Task Force, bringing together some of Florida’s sharpest scientific minds to assess the problem and suggest solutions.

He’s helped steer record funding toward Everglades restoration, including the shrunken-down Everglades Agricultural Area (EAA) reservoir (more on that below).

And earlier this year he vetoed Senate Bill 2508, a bill that would have perpetuated Big Sugar’s stranglehold on Lake Okeechobee water policy, guaranteeing more toxic discharges.

Obviously, there are some hits here. But there are also some misses.

On harmful algal blooms, for example: both task forces produced a series of recommendations, but Florida has ignored virtually all of them. It’s not enough to study the problem; the governor should be utilizing his bully pulpit to insist the legislature adopt the recommendations.

DeSantis hasn’t. Charlie Crist has said he will.

As for water storage in the Everglades, we’re wary of treating the EAA reservoir as “the solution” to the problem of discharges from Lake O. If the best-case scenario plays out, the reservoir — in tandem with other projects in the pipeline — will help. But we still need significantly more land to store, treat and convey water from the lake to the Everglades.

DeSantis has not been talking about this. Crist has, by suggesting the plan he struck in 2008 as governor to buy sugar-owned land south of the lake be revived.

Crist’s “Clean Water For All” plan vows to crack down on agricultural run-off, a major factor in our nutrient-laden waters. He supports the proposed Right to Clean Water constitutional amendment, which VoteWater backs.

Crist laid out these positions and more in his response to VoteWater’s Clean Water Questionnaire. These surveys, sent to nearly 500 candidates statewide, were a key to our assessments, allowing candidates an opportunity to articulate their approach to Florida’s water issues.

The DeSantis campaign, unfortunately, did not fill out the survey.

Crist also signed our “No Big Sugar Money” pledge, which seeks to end the influence of Big Sugar money in politics. DeSantis has not done so.

We did find that the Crist campaign has received around $56,000 in campaign contributions from political action committees funded in part by sugar interests. It’s common for Big Sugar to cloak its political giving by funneling the money through PACs.

But we were particularly disappointed to see how much money DeSantis has gotten from these PACs. Our research identified at least $2.1 million in contributions to the “Friends of Ron DeSantis” campaign committee by PACs such as the Associated Industries of Florida, the Florida Prosperity Fund, the Florida Chamber of Commerce PAC and the Voice of Florida Business PAC — all of which are heavily funded by Big Sugar.

Media coverage from 2018 documented this same dynamic; DeSantis may be willing to stick his finger in Big Sugar’s eye (rhetorically) now and then, but he also takes quite a bit of industry cash through the back door, via these PACs. This may help explain why he signed a controversial Senate bill in 2021, SB 88, which protects Big Sugar from lawsuits over the practice of burning the sugar fields prior to harvest — and was described as a “gift” to the industry.

So this was our process; this is how we approached the endorsement. That we backed Crist doesn’t mean we think DeSantis a bad choice; it means that for the reasons listed above, we believe Crist is the better choice.

We realize not all will agree. Whomever you plan to vote for, at the gubernatorial level all the way down to your local county commission, we should recognize where progress has been made.

But we need to be clear-eyed about how far we’ve yet to go — and who offers the best chance to get us there.